With many still recovering from last year’s hurricane season, news of dire predictions for the 2022 season offer no comfort to the weary. It’s time to prepare for a stormy weather ahead, a point made all the more clear as we all watch to see whether Pacific storm Agatha crosses into the Atlantic to become Alex, the first Atlantic storm of the 2022 season.

The hurricane season typically runs from June 1 – November 30th, with an occasional outlier forming in the off-season months. The forecasts for hurricane season refer to the area including the Atlantic Ocean, Gulf of Mexico and the Caribbean Sea. Hurricanes are defined as tropical cyclones that have sustained winds of 74 mph or higher. Hurricanes are ranked by wind speed on the Saffir-Simpson Hurricane Wind Scale and may reach anywhere from a category 1-5 storm, with category 5 being the most severe. Both Colorado State University’s Tropical Meteorology Project Team and the National Oceanic and Atmospheric Climate Prediction Center (NOAA) have predicted an above-average hurricane season for 2022. This continues the trend of above-average hurricane activity for the last seven years in a row.

On Tuesday, May 24, 2022, NOAA issued its report for the 2022 Atlantic hurricane season. It forecast 14-21 named storms, 6-10 of those will become hurricanes and 3-6 will likely reach Category 3 levels or higher, which will render them major hurricanes. This means more major hurricanes this year than average.

Earlier this year, Colorado State University, released its forecast and numbers (link here). Their predictions are almost identical to those issued by NOAA this week. Forecasters predict a 60% chance of an above-normal season, a 30% chance of a near-normal season, and a 10% chance of a below-normal season. CSU also forecasted that there is a 71% chance of a major hurricane making landfall in the United States. It further delineates the most at-risk areas:

Researchers have pointed to several possible reasons for the coming above-average hurricane season:

La Nina conditions are currently present in the Pacific. La Nina causes cooler ocean temperatures around the equator in the Pacific and as result provides favorable breeding ground for hurricanes. In contrast, El Nino conditions typically favor a less active hurricane season due to an increase in upper-level winds over the tropical Atlantic that break up storms. When La Nina is present, as it is this year, an active hurricane season is more likely.

The current sea surface temperature correlates with past active Atlantic hurricane seasons. Meteorologists are particularly focused on the “Gulf Loop Current.” This current contains warmer water that travels between Mexico and western Cuba and into the Gulf of Mexico. The current is flowing farther North than usual and warming the water closer to land in the Gulf. Some forecasters have compared the location of the Gulf Loop Current this year to 2005, when the major hurricanes, Katrina and Rita, hit the U.S.

No one can predict for certain how many storms will form or intensify into hurricanes that make landfall on U.S. territory but based on historical data and current conditions scientists are concerned that the coming hurricane season could bring destruction with it.

Historical Data for the Hurricane Season

Going back over ten years, it is clear that the last few years in a row have packed a particularly powerful punch. 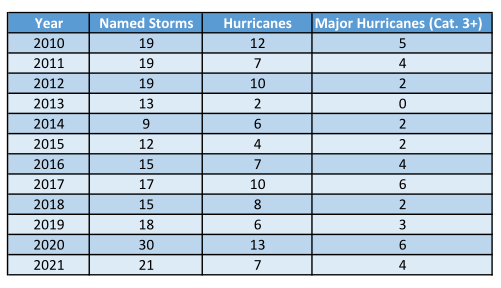 WSHB has offices positioned in prime hurricane areas including North and South Carolina, Georgia, Florida, Alabama, Louisiana and Texas. Our attorneys have extensive experience in dealing with the legal aftermath of these storms and stand ready to answer and address all questions and concerns. Please do not hesitate to reach out to a member of our team for further assistance.